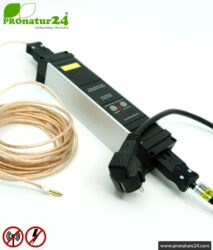 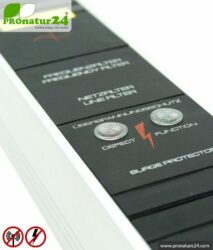 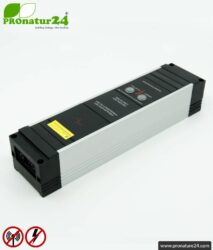 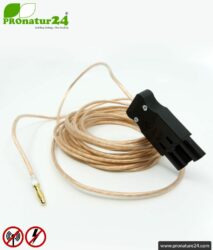 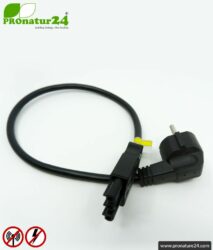 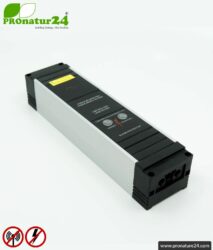 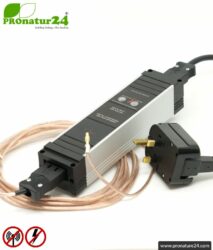 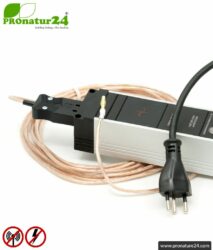 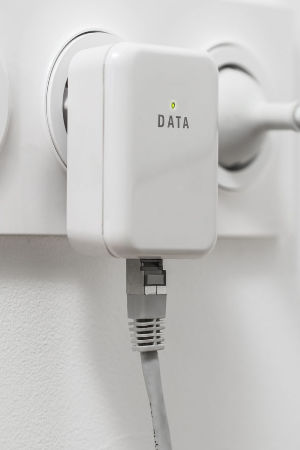 POWERLINE PLC Filter for groundable canopies, such as the Electrosmog PRO canopy

The emerging problem of Powerline mobile radiation through the grounded canopy is solved with this POWERLINE PLC FILTER. This extremely problematic situation can arise when using the Powerline, also called PLC, as soon as the canopy protected from electrosmog is connected to the socket’s earth. This will probably happen to any owner of a grounded canopy as soon as smart meters have to be used by law to read the power consumption.

If the canopy’s earth is on the grounding heating pipe instead of the socket’s earth, this topic is probably pointless and the problem has already occurred. Installation on a heating pipe does not run parallel to the power line most of the time and cannot be compared to a grounding cable integrated into the power cable.

Canopies against electrosmog can be a real blessing to the growing number of people who are sensitive to electricity. It is easy to protect yourself from continuous exposure to high-frequency RADIO (WLAN, mobile radio, DECT, LTE…) and, as long as it can be grounded, from low-frequency electric fields (power supply, alternating current) as well. Radio waves that hit the canopy are reflected (HF cannot be grounded) and electric alternating currents that hit it are diverted by the earth connection. In order to guarantee that the earth works, you must get the actual earth contact on the socket or heating pipe by a professional. It wouldn’t make sense to connect the canopy to an earth that isn’t connected itself.

And if, in the end, you manage to get an electrosmog-free sleep or one with considerably weaker electrosmog, a neighbor comes with Powerline / PLC and possibly undoes a lot of the work that you have done. Or the use of smart meters used to measure power consumption is made compulsory by law and the energy supplier decides to use the Powerline variant with data transmission over the power grid.

About the POWERLINE / PLC situation and groundable canopies

PLC means “Powerline Communications” and is also known as DPL “Digital Powerline”. Powerline identifies the technology used to transmit data over the power cable. The live cables are used parallel to the energy supply to transmit data. On the copper power cable with a 50 Hz alternating current, a high-frequency signal is modulated to a frequency between 2 and 68 MHz through this “piggyback” technology. In one place in the house or residence, the data/Internet signal from the modem is put on the power supply and consequently, each individual power cable in the house practically becomes a “network cable” for data transmission but, unfortunately, it becomes an antenna at the same time. Instead of a WLAN router in the house, now each individual power supply is a radio transmitter.

Our “Electrosmog FUNK” and “Electrosmog PRO” canopies have no problem regarding the increase of MOBILE RADIATION. Not even the grounding cable used for the Electrosmog PRO canopy, which is necessary for extra protection from electric alternating fields, would have a problem. However, Powerline PLC can possibly turn the canopy into an efficient antenna through this earth connection.

The grounding conductor integrated into the power cable can be influenced and “contaminated” by this modulated Powerline signal. However, that has only been the case up until now.

The newest Powerline PLC technology consciously uses all three of the power supply’s copper cores to get the highest data transmission rate, this means it uses the phase (L), the neutral conductor (N) and the protective conductor (PE).

As a result, the protective conductor is not only influenced by this, but it is transformed into a fully loaded transfer medium or signal cable for HF frequencies between 2 and 68 MHz.

And this modulated Powerline PLC signal “waits for” the PE connection to the socket, or “pick-up”. If the canopy’s grounding cable is now plugged into such a socket, this radio signal can be transmitted on the grounding cable of the canopy’s conductive shielding fabric. The end result is that the electric alternating fields from the power supply are still being deflected, but there is the possibility that the shielding canopy becomes a big mobile communications antenna between 2 and 68 MHz, working inside and outside.

This new situation concerns all groundable canopies that we could previously get on the market. In the last few months, one of the focuses of our work was to make our Electrosmog PRO canopy fit against Powerline PLC. And we managed to do it with a team of experts – for the first time, we are able to offer a solution for grounding cables with Powerline PLC loads. Developed openly for maximum compatibility with all groundable canopies, even though it is optimized as a pure pluggable variant for our Electrosmog PRO canopy.

This POWERLINE PLC filter set for groundable canopies is a grounding cable and Powerline PLC filter in one. The filter unit is crammed with electronic engineering with just one goal in mind – to remove all of the smallest “particles” on the Powerline PLC frequency / signal / radiation from the earth support and turn a “contaminated” earth support into a cleaner grounding conductor. The polluting signal gets to the Powerline PLC filter then reaches a dead end. The grounding cable between the filter and the canopy is super clean and the groundable canopy can do what it is meant to again – protect people from HF and LF electrosmog.

All Powerline PLC filter set components are high-quality and very effective in removing Powerline PLC frequencies. The grounding cable is available in special sizes upon request.

VARIANTS OF THE POWERLINE PLC FILTER 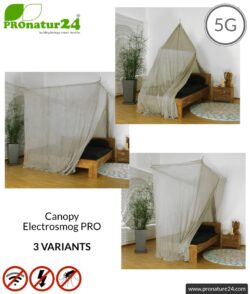 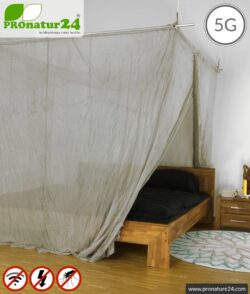 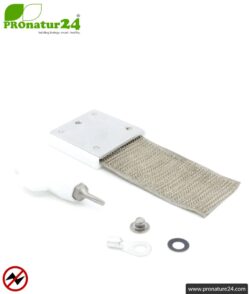 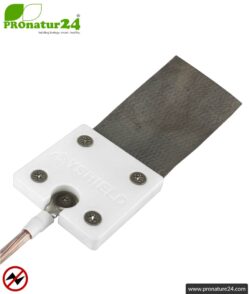 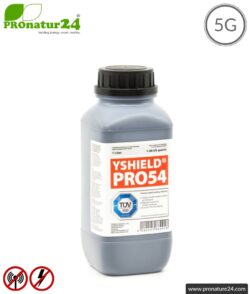 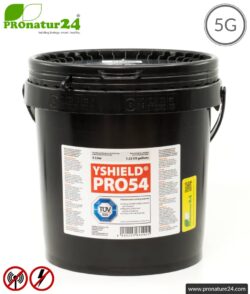 Shielding paint PRO54 | RF screening attenuation against electrosmog up to 93 dB at 40 GHz | no graphite effect = does not stain | technically the most resilient shielding paint | TÜV SÜD certified | effective at 5G! 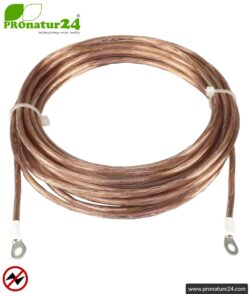 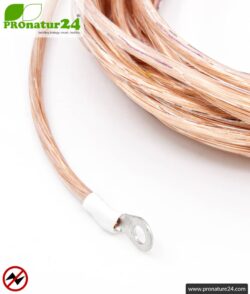 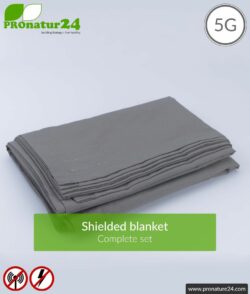 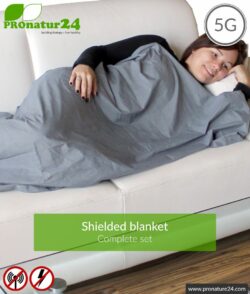 Shielding blanket TDG in a set | Mobile radiation protection against RF up to 99.99% (41dB) | Groundable. Effective against 5G! 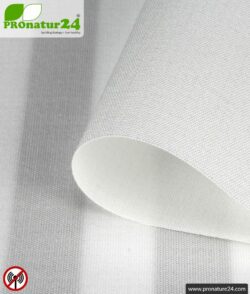 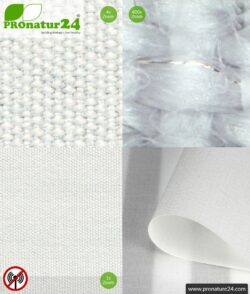 WAIVER OF RIGHT OF WITHDRAWAL

As usual with cuts, there is no right of withdrawal. The ordered amount is unrolled from the roll of fabric and cut according to the number of running meters. It is no longer possible to resell cut roll goods. For this reason we offer the free fabric sample plus postage costs. With the order you waive the statutory right of withdrawal. Due to the high production costs and in favor of a reasonable sales price, small defects (e.g. a thread knot) are not a reason for complaint.
YES, accepted
Sample
NEW 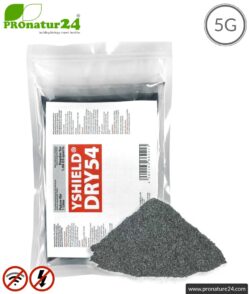 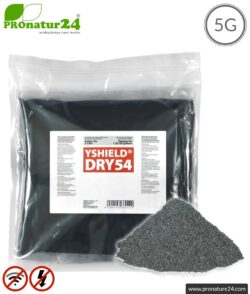 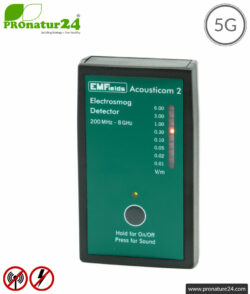 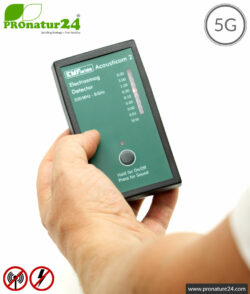 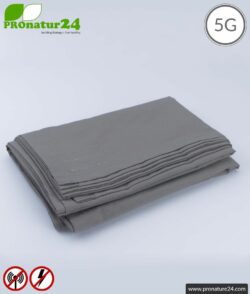 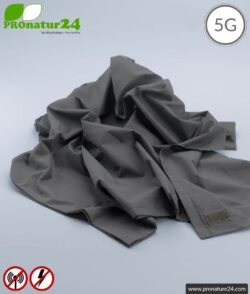